What We Can Learn from Pokemon GO

This article isn't going to be about the game itself, but about the effects of it. We will try to look a little behind the curtain from a product & marketing perspective.

I've had a look at Pokemon GO the last couple days and got hooked immediately. There might be many reasons for it, but for me it was the feel of nostalgia. I loved playing Pokemon as a teenager for hours on my Gameboy Color. (I have to admit, I was a little too old for it at the time)

Right now, Pokemon GO went on to become the most popular paid app in the iOS store within just a few days. But besides people just downloading it, they also spend tons of cash on it. According to Sensor Tower, Pokemon GO is currently generating more revenue than any other iPhone app in the United States. As of yesterday, around 7.5 million people downloaded it. 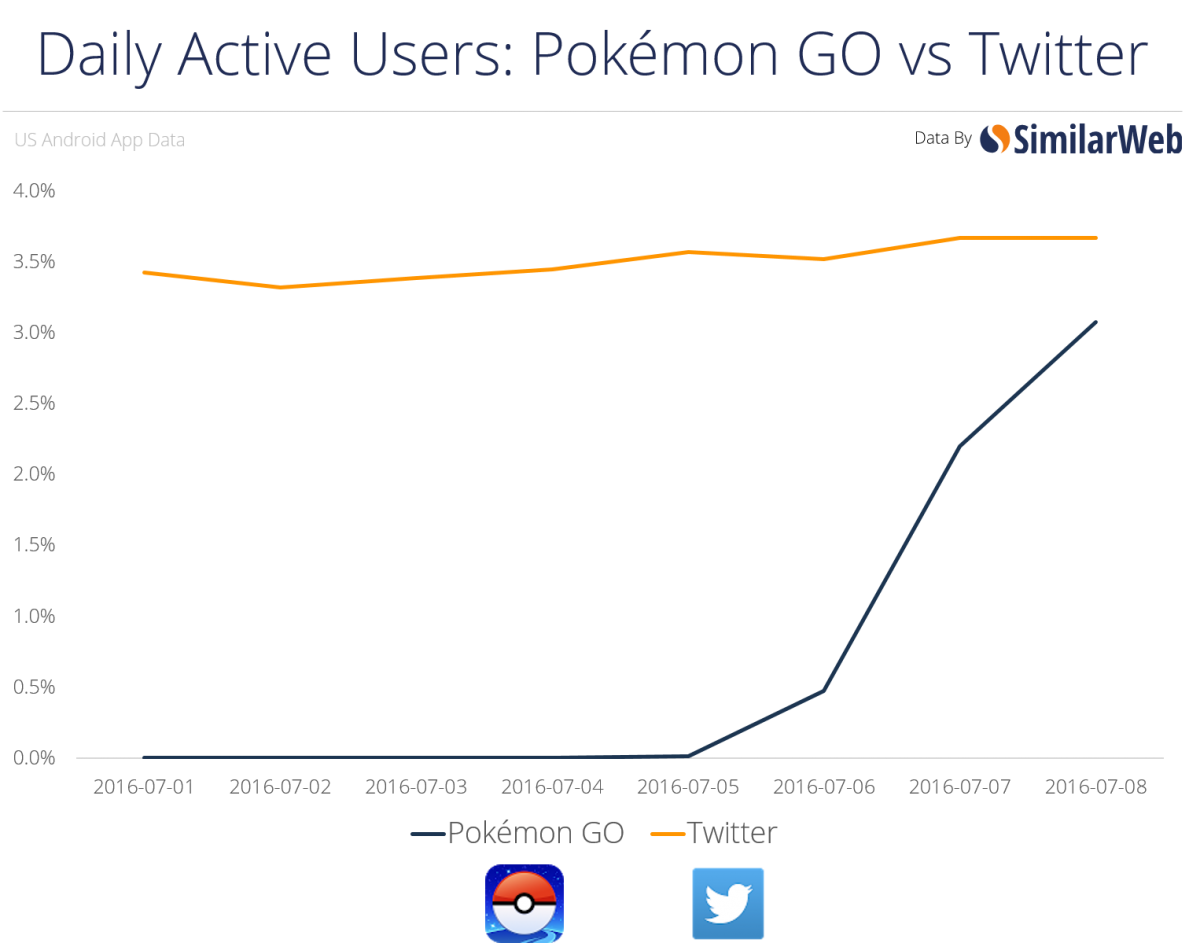 According to Forbes, Pokemon GO is on it's way to have more daily active users than the platform Twitter. Of course it's early to look at these numbers, but we have to admit this is massive within just a few days and considering it hasn't even launched outside the US.

How did Pokemon GO became so popular?

Generally, there are many reasons and there is never a perfect recipe for it. But there are a couple things worth mentioning.

The app developer Niantic launched a similar app called Ingress in 2012 on Android as well as iOS in 2014. You might have heard of it, but chances are you haven't, even though roughly 12 million people ended up playing it. Ingress is another augmented reality game, just like PGO, but with a different storyline.

PGO basically borrows the technical aspects of Ingress but replaces it with a widely known storyline & recognized brand called Pokemon.

Which means, the game developer Niantic had plenty of experience before launching Pokemon GO making this hardly an overnight success. Besides that, Niantic seems to be a Google company, which might explain their expertise with geo location services.

I think this is a big one. Pokemon GO launched on both, iOS and Android at the same time. I don't remember the last time a game developer or other product company launched their app on both platforms at the same time.

On top if it, there is no complicated sign up process. Just log in with your Google account and you're done. It could be even simpler with a Facebook login, but knowing Niantic is a (Ex) Google company, there might be reasons to that.

Pokemon GO checks pretty much every mark when it comes to the game play. It needs almost no explanation. It's very easy to get started and earn your first rewards. There is little to no on-boarding because it's simply not needed.

We have everything that makes an RPG (Role Playing Game) successful. From leveling your character, catching your first Pokemon to collecting items by walking around the streets.

Everything happens within minutes. And before you even notice, you've invested a couple hours into the game, ready for the Sunk Cost Fallacy to kick in.

The feedback of everything in the game is instant. It's like checking your Facebook or Instagram notifications. A new Pokemon could be right around the corner, and catching it is at least as satisfying as clicking on that little red notification bubble on Instagram or "pulling to refresh" which I'm pretty sure you do too many times a day.

It smoothly navigates you from one trigger to the next rewarding you along the way. From a product design perspective, it's brilliant. Even though the game was buggy and crashed on me every other minute, I just kept rebooting it because I just wanted to play. I was hooked.

Besides that, Pokemon GO relied heavily on word of mouth marketing.

There is no friending or internal sharing system within the game, which forces you to take screen shots and share your progress with pretty much any other social network of your choice.

There is something great about PGO not having their own friends list. Because it's also an augmented reality game, you have to walk up to people and talk to them. The game encourages you to interact with strangers, and even little design tricks inside the game show you that you're never really alone. (for example, it will show you hot spots on the map with high activity or meeting areas)

Even if none of your friends play the game, you will find friends pretty quickly. And that's the magic and backbone of why the fire of Pokemon GO is spreading so fast. A lot of other games or apps usually suffer from the chicken or egg problem. They might have great game play, but they force you to add friends first. And because you don't have any yet, you end up not playing the game. It's just too much of an investment to make.

But what about the effects of playing Pokemon GO?

The last few days I walked around Brooklyn with my iPhone glued to my hand trying to catch Pokemon. It was magical and while I'm usually not a big mobile gamer (and probably won't play this for long) I never had such a unique gaming experience.

Pretty much on every corner I could see people playing the game. You just know when someone stands on a weird spot holding up their iPhone to a wall and you're pretty sure they're not taking a picture of it.

Yesterday I walked a couple blocks around the neighborhood and met around 15 other strangers doing the same.

There is something special about this game I've never experienced before with any other app or game. Because it uses augmented reality, there is some sort of connection between the digital and the real world.

Usually I would never talk to strangers who're on their phone, even if I would find out they're playing the same game as I do. But because Pokemon more or less exist in the real world, and I have to enable my camera to see them, the barrier of the digital world disappears.

In pretty much all cases when I spotted someone playing Pokemon GO on the weekend, or they saw me, we talked to each other and had a social interaction.

I couldn't help but think about the effects this game could have on millions of people with social anxiety or even depression. People who rarely leave the house or have struggle being around people.

While I wouldn't say I have social anxiety, I do prefer to be alone and large groups of people usually drain my energy pretty quickly. I don't think I ever had as much social interaction with strangers by just walking around the city than this weekend.

Now you could argue that this is my fault and I can talk to strangers even without a game. Well, that might be true, but for millions this is easier said than done.

After doing some quick online research I could already find thousands of tweets from other people confirming my assumption, Pokemon GO might be good for your mental & physical health. (obviously this is not qualitative research)

Multiple articles have spawned around the web reporting on similar findings. If you like to read more into it you can do it here and here. (sorry for linking to Buzzfeed)

Now, the question is: Will Pokemon GO stick?

We don't know and it's way too early to tell. But a couple things are worth mentioning:

1. Pokemon GO has way more potential than what it is right now. I'd assume it's growth will stagnate pretty soon, but a fairly big group of core players will stick.

2. Pokemon GO essentially kicked of the augmented reality wave again. AR has been around for a while, but most of the times it felt gimmicky or was just used for experimental reasons. I'm pretty sure that many other games or apps will follow.

Pokemon GO proved that augmented reality could be done in a way that makes sense.

When it comes to me, I will probably stop playing in a couple days, not because I don't like the game, but because I'm just not a big mobile player anyway.

But the lessons I learned from Pokemon GO are valuable to me as a product designer & maker. Even if you don't like Pokemons or mobile gaming at all, we can watch and learn.

What have been your experience with Pokemon GO? Please share it with me via Twitter. (You can do email too, but it might be a bit of an overkill for me)